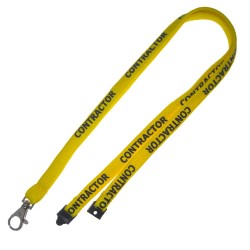 You may have heard it said that a lanyard is a boring item meant just for office workers and students. But no matter what you have heard nothing could be further from the truth. A lanyard is not just a versatile item that can be utilised across all industries but it can be used at any event. Apart from being practical for daily uses, they are also great for concerts and events. One such event that they are great for is concerts. It you have attended a concert of any sort whether a rock concert or pop concert or gone to see your favourite band at your local concert hall then you most certainly would have seen someone wearing a lanyards.

I have been to numerous concerts myself when I was younger and I have seen quite a few. I attended heaps of blues concert in the past and I saw quite a few. They are aways attended my staff who could not do without a lanyard nor could they function without one. With large events such as rock concert it is important for attendees to be able to identify staff as those events. Any concert that you attend you will invariably see all sorts of support staff looking after the every needs of the concert goers. There are of course the ushers. How would anyone be able to identify the ushers without their lanyards and polo shirts with “staff” emblazed across them. Also how could trust their credentials without their ID attached to their lanyard.

People also inevitable get sick at these rock concerts so finding first aid staff needs to be easy and they need to be visible to others at the event. They too would require the staff to have identification would would necessitate a lanyard and an ID card attached.

So next time you go to a rock concert or a pop concert with Madonna, Tailor Swift or the Rolling Stones then will definitely see staff are wearing and you will see that a printed lanyard and you will realise that they are not boring after all.